Curiosity update: Exploring the new terrain – one measurement at a time 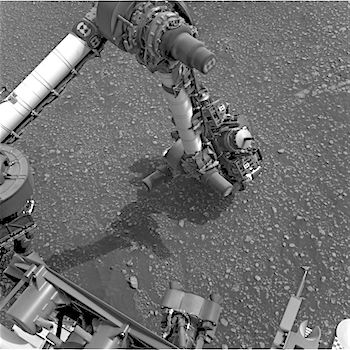 Sols 2315-17, February 11, 2019, update by MSL scientist Suzanne Schwenzer: Curiosity is driving across the clay-bearing unit, which is still a very new terrain with many details yet to be understood. The region is covered in little pebbles – and has lots of small sand patches, too, both of which we continue to investigate. The Navigation camera image above shows the APXS being deployed on the sand patch Alba that was investigated on sol 2313. After that, the drive took us a little further north, to be exact, Curiosity drove 39 metres from the last location.

The parking location presented us with the same pebbly-strewn surface as before, with the occasional small sand feature. With this terrain being new, and some small-scale sedimentary features spotted by the eagle-eyed sedimentologists on the team, we decided to use ChemCam on three pebbly targets, “Dauntless,” “Otter,” and Thistle.” The team also found – for the first time in this new unit – a pebble large enough to get a full APXS raster on one continuous piece of rock. Yes, this is how small the pebbles are! We used the opportunity, named the target “Emerald,” and investigated it using a 3-spot APXS raster… [More at link]