MAVEN: Shrinking its orbit to prepare for Mars 2020 rover 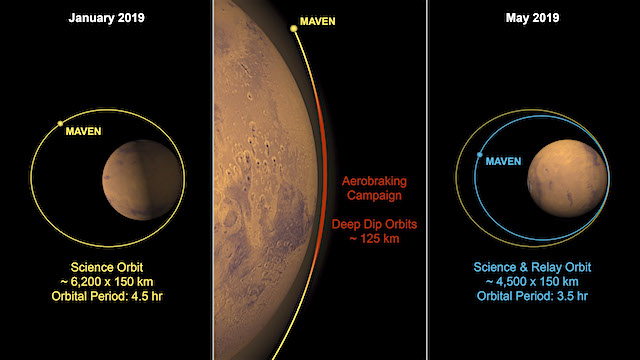 The 4-year-old atmosphere-sniffing MAVEN mission is embarking on a new campaign today to tighten its orbit around Mars. The operation will reduce the highest point of the MAVEN spacecraft’s elliptical orbit from 3,850 to 2,800 miles (6,200 to 4,500 kilometers) above the surface and prepare it to take on additional responsibility as a data-relay satellite for NASA’s Mars 2020 rover, which launches next year.

“The MAVEN spacecraft has done a phenomenal job teaching us how Mars lost its atmosphere and providing other important scientific insights on the evolution of the Martian climate,” said Jim Watzin, director of NASA’s Mars Exploration Program. “Now we’re recruiting it to help NASA communicate with our forthcoming Mars rover and its successors.”

While MAVEN’s new orbit will not be drastically shorter than its present orbit, even this small change will significantly improve its communications capabilities. “It’s like using your cell phone,” said Bruce Jakosky, MAVEN principal investigator from the University of Colorado Boulder. “The closer you are to a cell tower, the stronger your signal.” [More at link]