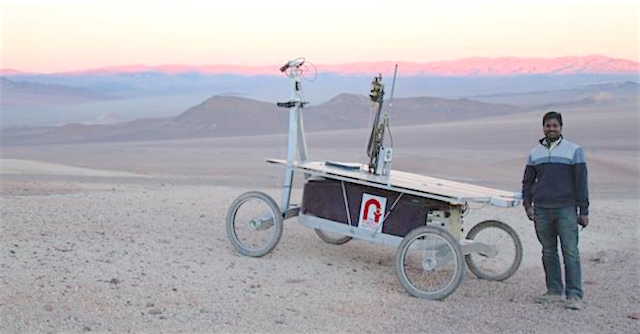 [Editor’s note: From a paper by Kimberley Warren-Rhodes and eight co-authors recently published in Frontiers in Microbiology.]

Sediments in the hyper-arid core of the Atacama Desert are a terrestrial analog to Mars regolith. Understanding the distribution and drivers of microbial life in the sediment may give critical clues on how to search for biosignatures on Mars.

Here, we identify the spatial distribution of highly specialized bacterial communities in previously unexplored depth horizons of subsurface sediments to a depth of 800 mm. We deployed an autonomous rover in a mission-relevant Martian drilling scenario with manual sample validation.

The study identifies linkage between biocomplexity, moisture and geochemistry in Mars-like sediments at the limit of habitability and demonstrates feasibility of the rover-mounted drill for future Mars sample recovery. [More at link]