The banded terrain on Mars 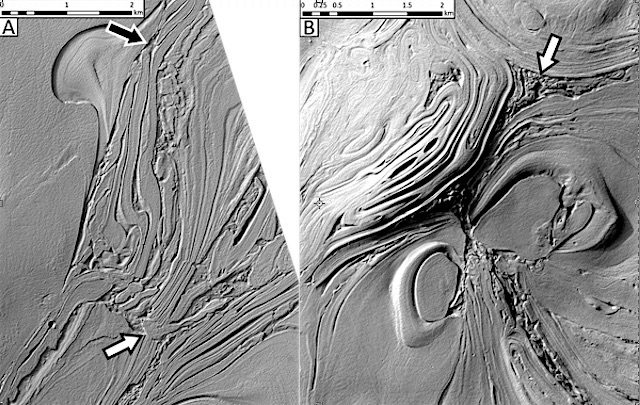 Planetary Geomorphology Image of the Month, March 1, 2019: Hannes Bernhardt (Arizona State University). An article on the banded terrain cannot be commenced by a traditional definition, as it appears to be a truly singular occurrence in the Solar System. In a competition for the most mysterious landscapes on Mars, the so called “banded terrain” (Image 1) would certainly be a hot contender – a fact illustrated by one of its other descriptive appellations: “Taffy pull terrain.” It is a strong reminder of the limitations that are intrinsic to remote sensing geology but also of the strengths of comparative geomorphology.

The banded terrain is a unique landscape occupying over 30,000 km² of northwestern Hellas Planitia, the floor of Mars’ largest and deepest impact basin located in the mid-latitudes of its southern hemisphere (Diot et al., 2015; Bernhardt et al., 2019). The banded terrain consists of a smooth surface (at meter-scale) dissected by up to ∼30 m deep, crevice-like, curvilinear troughs (“inter-bands”) at a median spacing of few 100 s of m (Image 1A). These troughs… [More at link]