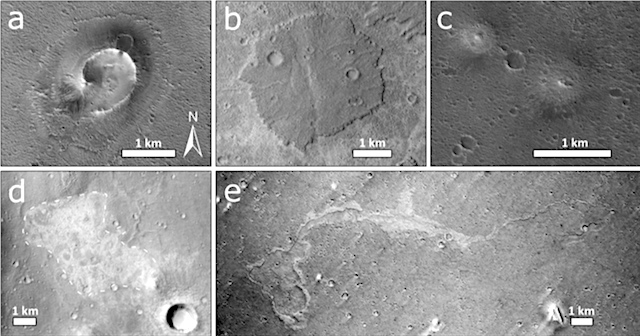 [Editor’s note: From a paper by Petr Broz and four co-authors recently published in the Journal of Geophysical Research.]

Subsurface Sediment Mobilization in the Southern Chryse Planitia on Mars

• Southern Chryse Planitia contains a large field of Amazonian‐aged extrusive landforms, which can be grouped into five classes

Ever since the presence of methane in the Martian atmosphere was reported from ground‐based, orbital, and in situ observations, mud volcanism was hypothesized to be a possible release mechanism, and various mud volcano fields have been tentatively identified.

Although morphological similarities with Earth sedimentary volcanism have been proposed, it is difficult, however, to prove unambiguously the presence of mud volcanism in remote sensing data, and some of the reported mud volcanoes have alternatively been interpreted as igneous volcanoes. A definitive identification of sedimentary volcanoes on Mars is therefore still problematic.

A useful candidate area to test the hypothesis of sedimentary volcanism on Mars is a field of kilometer‐sized cone‐ and pie‐like landforms in the southern part of the large ancient Chryse impact basin, part of which was previously studied by Komatsu et al. In this study, we searched for those landforms inside Chryse Planitia and determined their full spatial extent.

We found that they can be divided into five morphologically different groups and that they occur exclusively on the level sedimentary plains. These findings enable us providing additional evidence to support the hypothesis of subsurface sediment mobilization as a possible mechanism for their formation. [More at link]