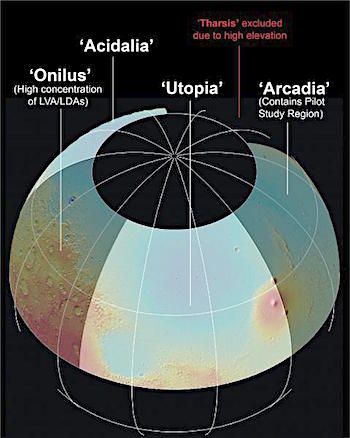 Missions carrying humans to Mars will require on-site resources, and a project led by Planetary Science Institute (PSI) scientists Nathaniel Putzig and Gareth Morgan is mapping the availability of potential shallow water-ice sources across the surface of the Red Planet.

Two teams led by Putzig and Morgan were contracted by NASA to pursue separate mapping efforts of subsurface ice deposits in Arcadia Planitia. After their mid-term reports showed significant synergy, the teams were combined in a joint project called “Subsurface Water Ice Mapping (SWIM) on Mars,” which extends the coverage of the mapping project from an experimental swath over Arcadia Planitia to all other low elevation regions across the Martian Northern Hemisphere.

“Water ice will be a critical resource for human explorers on Mars, not only for life support but also for generating fuel to power equipment on the ground and rockets for the return journey to Earth,” said Putzig, a Senior Scientist at PSI. “Maps that identify the nature and availability of potential water resources will help determine where humanity will establish its first outposts on Mars.” [More at links]