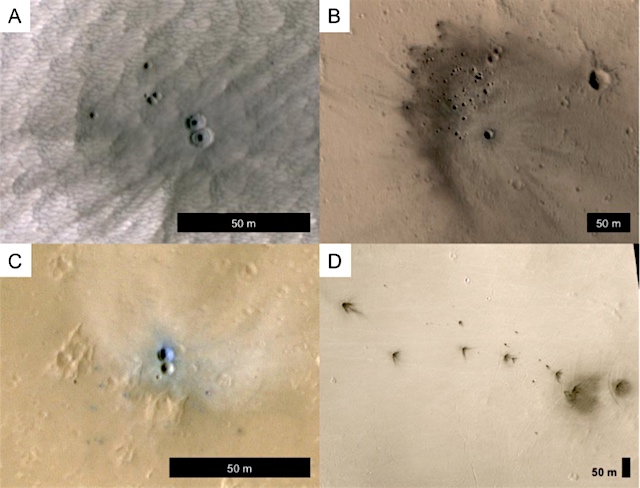 [Editor’s note: From a paper by Ingrid Daubar and three co-authors recently published in the Journal of Geophysical Research.]

• We report on properties of new dated crater clusters on Mars; most clusters in this study comprise <10 craters and span hundreds of meters

• Impact angles are shallower than expected, which could be a possible observation effect

We studied clusters of new craters that formed in the last few years when meteoroids broke up in the atmosphere of Mars. We studied 77 clusters and measured the number of craters, the sizes of the clusters, how spread out the clusters are, the direction the impactors came from, and the angle of the impacts.

Clusters range from a few to hundreds of craters, with most containing tens of craters. They are usually spread out over hundreds of meters, ranging from a few meters to a few kilometers. Except for the highest areas, clusters are more spread out at lower elevations, as expected.

Impactors come from all different directions. Impacts are closer to horizontal than expected.

This information will be used to understand breakup in the Martian atmosphere; properties of the incoming meteoroids, such as their density and orbits; and how well we would be able to detect impacts with a seismometer. This is important because about half of current impacts at Mars are clusters. [More at link]