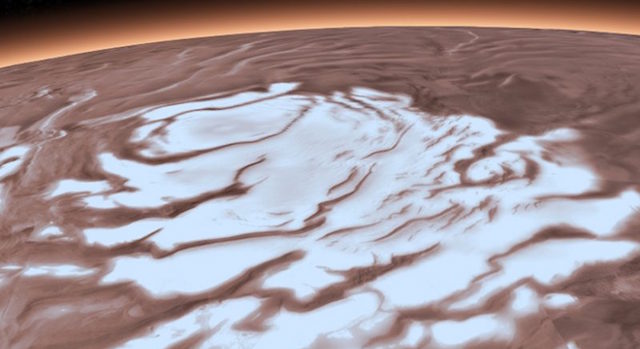 Thermal modeling suggests that active magmatism in the past few hundred thousand years could account for the presence of a large lake previously hypothesized beneath the Red Planet’s southern ice cap.

Liquid water appears to be a fundamental requirement for life, which is why a recently published article [mentioned here] reporting evidence of a 20-kilometer-wide lake located at the bottom of Mars’s south polar ice cap — 1,500 meters below the icy surface — has stimulated considerable scientific interest. The article’s authors proposed that concentrated salts, which lower the freezing point of ice, could account for the lake’s presence, but the study did not consider the conditions needed to melt ice in this location or whether they are physically plausible.

Now Sori and Bramson have taken this step to better constrain the circumstances under which subglacial water could form on Mars today. Using a series of one-dimensional thermal models, the team evaluated whether several key parameters, including subsurface heat flow and the concentrations of different salts, could induce melting at the base of the south polar ice cap.

Their results indicate that no amount of salt would suffice to melt the basal ice under typical Martian conditions. Instead, the researchers calculate that a local source of heat with a flux of at least 72 milliwatts per square meter would be necessary to raise subsurface temperatures high enough to melt the ice. [More at links]