Curiosity update: Why are we cracking up? 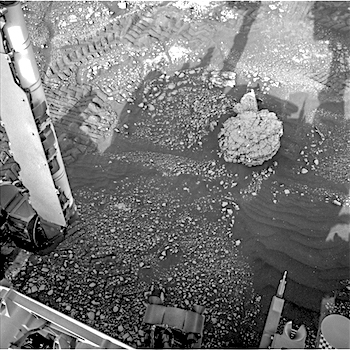 Sols 2352-53, March 19, 2019, update by MSL scientist Dawn Sumner: Today was a fun, busy day to plan. Curiosity finally made the drive to a rock called “Muir of Ord,” which has a cracked surface. The science team is particularly interested in imaging this rock up close because of the fracture patterns (see image – I can’t find an online image of our current workspace, but that’s what I want).

Cracks like these can form from mud drying out when the original sediments were deposited or after exposure of the rock during weathering (see this rock from the Opportunity rover).

If the cracks on Muir of Ord formed when the sediment was first deposited, they tell us something about the depositional environment. If they formed during weathering, they tell us about processes on the slopes of Mount Sharp. Today, we planned observations to help determine which is more likely… [More at link]