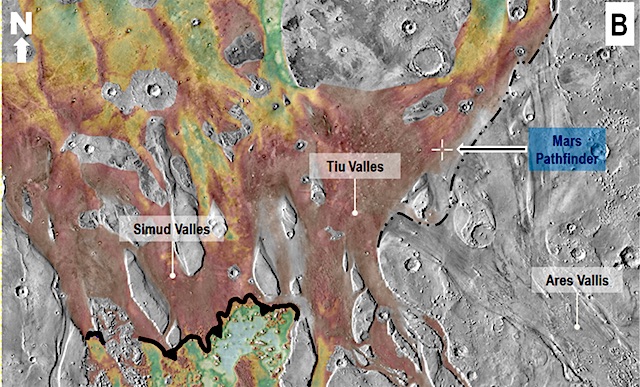 The landing site is on the spillway of an ancient sea that experienced catastrophic floods released from the planet’s subsurface and its sediments. This could potentially yield evidence of Martian habitability, said Rodriguez, lead author on “The 1997 Mars Pathfinder Spacecraft Landing Site: Spillover Deposits from an Early Mars Inland Sea,” which appears in Nature Scientific Reports. (…)

To test the Martian mega-flood hypothesis, NASA deployed its first Martian rover; the Sojourner, on board the 1997 Mars Pathfinder spacecraft that journeyed to the red planet. NASA spent a total of $280 million on the mission, including the launch vehicle and mission operations. The terrain within the rover’s visual range includes potential fluvial features suggestive of regionally extensive flooding.

However, those features suggest floods that were at least 10 times shallower than those estimated using images obtained from orbit. Hence, the mission was not able to exclude still disputed alternative views sustaining that debris or lavas flows could have in fact dominated the channels’ formational history without significant water discharges.

“Our paper shows a basin, with roughly the surface area of California, that separates most of the gigantic Martian channels from the Pathfinder landing site. Debris or lava flows would have filled the basin before reaching the Pathfinder landing site. The very existence of the basin requires cataclysmic floods as the channels’ primary formational mechanism” said Rodriguez. [More at links]