Can organisms survive on Mars, and can we identify them? 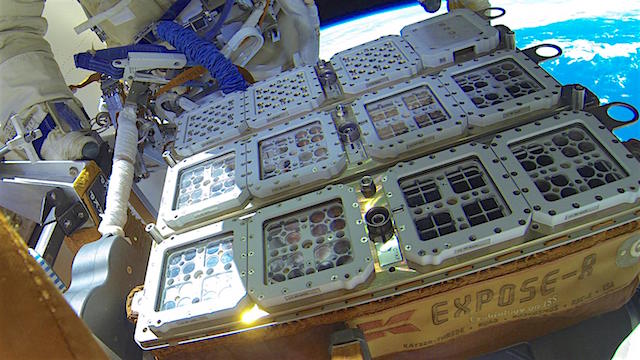 Earth is a very special planet. It is the only celestial body in the Solar System on which we know life exists. Could there be life on other planets or moons? Mars is always the first to be mentioned in this context; it has many properties in common with Earth, and in its geological past water also flowed over its surface. Today, however, conditions on Mars are so extreme that it is hard to imagine that organisms like those found on Earth could survive on that cold and arid desert planet.

One of the aims of the DLR-coordinated experiment BIOMEX (BIOlogy and Mars EXperiment) on the International Space Station (ISS) was to find out if this is indeed possible. The results are now available.

One key result is that, in fact, several terrestrial biological substances and structures are very tough. They survived very challenging environmental conditions during an 18-month stress test in space. The tests involved samples of different organisms such as bacteria, algae, lichens and fungi being exposed to vacuum, intense ultraviolet radiation and extreme temperature variations on the exterior of the ISS for a total of 533 days.

Astrobiologist Jean-Pierre Paul de Vera from the DLR Institute of Planetary Research in Berlin-Adlershof, the person responsible for the scientific management of BIOMEX, was impressed.

“Some of the organisms and biomolecules showed tremendous resistance to radiation in outer space and actually returned to Earth as ‘survivors’ from space,” he noted. “Among other things, we studied archaea, which are unicellular microorganisms that have existed on Earth for over three-and-a-half billion years, living in salty seawater. Our ‘test subjects’ are relatives of theirs that have been isolated in the Arctic permafrost. They have survived in space conditions and are also detectable with our instruments. Such single-celled organisms could be candidates for life forms that might be found on Mars.” [More at link]