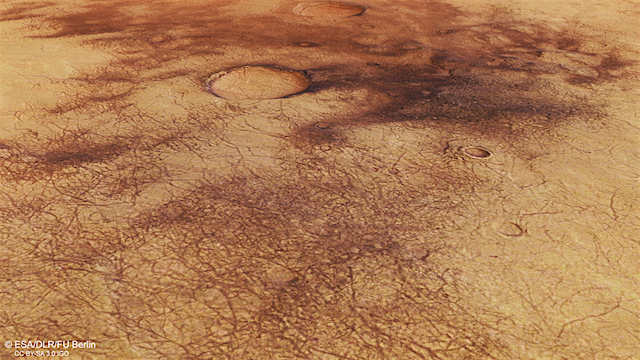 The winds of Mars are responsible for myriad features across the planet’s surface – including the dark dunes and wispy, filament-like streaks seen in this image from ESA’s Mars Express.

The intriguing features shown here are ‘dust devil’ tracks: as the Sun heats up the martian ground during the day, vortices form that lift warm air from near the surface, whipping up dust as they do so, shaping and sculpting it into swirling, column-shaped, tornado-like whirlwinds (click here for videos of dust devils made by NASA’s Mars rover Spirit).

These dust devils range across the entire planet, lifting the top, brighter layer of dust from the surface, and leaving darker paths in their wake. They are most often seen in the martian spring and summer, lasting for a few months at most before their tracks become obscured by dust that has been buffeted around by storms and winds.

These Mars Express images show a curving, looping, crisscrossing web of dust devil tracks in the southern hemisphere of the planet, around an escarpment feature known as Chalcoporos Rupes. This area is covered in a thick layer of dust and is not unfrequently home to wind-related activity.

Proctor, Russell, and Chalcoproros Rupes are based in Mars’ Noachis quadrangle, an area so thickly pockmarked with impact craters that it is thought to be one of the oldest parts of the planet… [More at link]