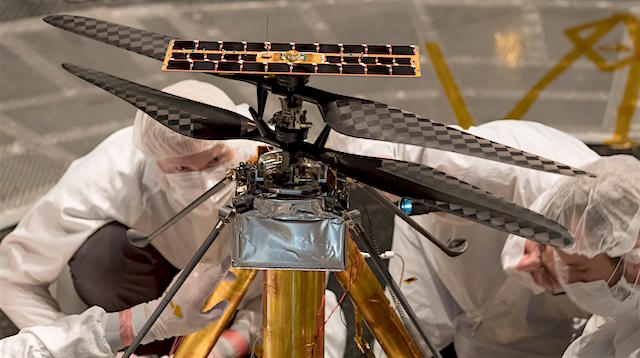 Since the Wright brothers first took to the skies of Kill Devil Hills, North Carolina, Dec. 17, 1903, first flights have been important milestones in the life of any vehicle designed for air travel… In late January 2019, all the pieces making up the flight model (actual vehicle going to the Red Planet) of NASA’s Mars Helicopter were put to the test.

Weighing in at no more than 4 pounds (1.8 kilograms), the helicopter is a technology demonstration project currently going through the rigorous verification process certifying it for Mars.

The majority of the testing the flight model is going through had to do with demonstrating how it can operate on Mars, including how it performs at Mars-like temperatures. Can the helicopter survive – and function – in cold temperatures, including nights with temperatures as low as minus 130 degrees Fahrenheit (minus 90 degrees Celsius)?

All this testing is geared towards February 2021, when the helicopter will reach the surface of the Red Planet, firmly nestled under the belly of the Mars 2020 rover. A few months later, it will be deployed and test flights (up to 90 seconds long) will begin – the first from the surface of another world.

“Gearing up for that first flight on Mars, we have logged over 75 minutes of flying time with an engineering model, which was a close approximation of our helicopter,” said MiMi Aung, project manager for the Mars Helicopter at NASA’s Jet Propulsion Laboratory in Pasadena, California. “But this recent test of the flight model was the real deal. This is our helicopter bound for Mars. We needed to see that it worked as advertised.” [More at link]