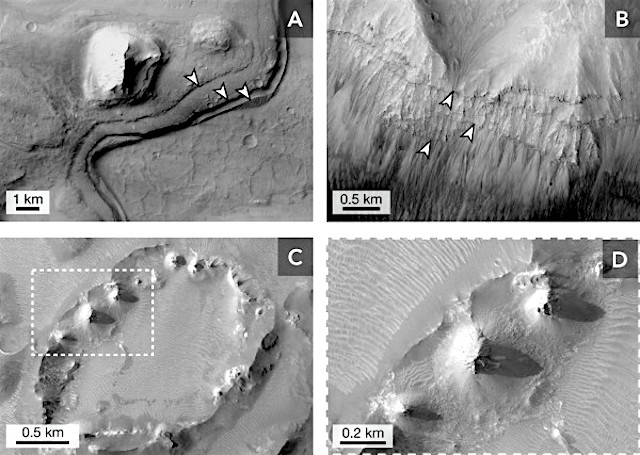 The Valles Marineris (Image 1) form the largest system of interconnected canyons on Mars, up to 2000 km long and in parts 10 km deep, and have long been a focal point of interest in planetary geomorphology. Recently, researchers including Mège and Bourgeois (2011), Cull et al. (2014), and Gourronc et al. (2014) outlined the case for a vast glaciation filling these canyons to several kilometres in depth. The implications of such a fill on the climate history and global water budget of Mars would be paradigm-shifting, but with high resolution imagery, features attributed as glacial may be better explained by more common geomorphological processes.

In Image 2, several features attributed to formation by glacial erosion are discredited when viewed in the 25 cm/pixel imagery of the High Resolution Imaging Science Experiment camera (HiRISE). These include a lateral moraine in Figure 2A as described by Gourronc et al. (2014), which on Earth are rubbly mounds of glacially-eroded sediment that accumulates at the edges of valley glacier margins. Up close, however, these bench-like platforms protruding from the walls of Coprates Chasma in eastern Marineris show regular, organised layering more like strata, disagreeing with moraines’ characteristic disorganised hummocks… [More at link]