Curiosity update: Luck be an Aberlady 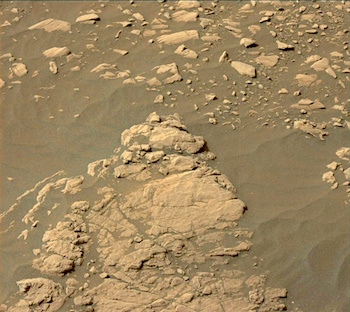 Sol 2367, April 3, 2019, update by MSL scientist Michelle Minitti: Our short drive on Monday was successful, bringing two candidate drill targets into closer, clearer view. The prime candidate (image above), “Aberlady,” appeared to have the same color, structure and texture as the Sol 2365 contact science target “Longannet.” The MAHLI and APXS observations from Longannet, and ChemCam observation of the Sol 2365 “Tartan” target, chosen because of its resemblance to Longannet, all fell in family with the range of lithologies we have observed in the clay-bearing unit. That gave the science team confidence that Aberlady was worthy of our first drilling efforts in the clay-bearing unit. However, because it is such an important decision, the science team elected to dedicate today to triaging Aberlady’s structure, texture and chemistry just to be sure. We crammed in as many science… [More at link]