Geology and astrobiology of McLaughlin Crater 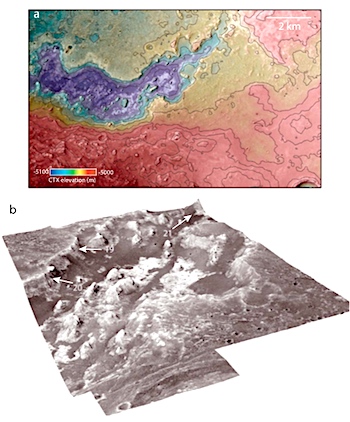 [Editor’s note: From a paper by Joseph Michalski and seven co-authors recently published in the Journal of Geophysical Research.]

• McLaughlin crater contained a deep, voluminous lake >3.8 Ga with features unlike any other known Martian paleolakes
• Sedimentary units include delta deposits, turbidites, and deep‐ water sediments; and hydrothermal deposits include serpentinites
• Geochemical gradients occurred in a long‐lived lake that was in sustained
communication with groundwater and subsurface environments

Though Mars is cold, dry, and inhospitable today, it contains evidence for many dry lake beds — relics of an ancient climate that was at least episodically warmer and wetter. Considering that lakes can be an excellent environments for life on Earth, a common thread of Mars research has been to characterize the environmental conditions under which Martian lakes formed in order to better understand their implications for past habitability of the red planet.

The goal of this work is to characterize the geology of McLaughlin crater, where a lake existed on Mars over 3.8 billion years ago. McLaughlin lake was vast, deep (~ 500 m), and probably long lived. Many characteristics of McLaughlin lake are unlike those seen in any other ancient lake basins on Mars. This lake contained a range of sedimentary environments including delta deposits, shallow‐water fan deposits, and deep‐water, fine‐grained materials.

It is the only known place on Mars where fine‐grained, subaqueous “landslides” called turbidites are identified, and these are important because we know that such deposits can be sites of excellent preservation of organic matter on Earth (due to rapid burial). [More at link]