Curiosity update: Wrapping up at Aberlady 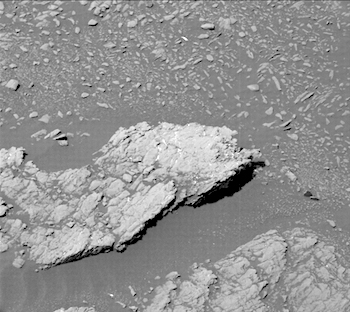 Sol 2379, April 15, 2019, update by MSL scientist Mariah Baker: With our time at Aberlady coming to a close, the search for our next drill target is in full swing. On Friday, the team discussed two different “bump” options that are near our current workspace and may be drillable. These targets were weighed against the option to head back toward a site we already passed or to do a small “walkabout” to scout out other promising bedrock outcrops. Ultimately, we decided to try our luck with one of the two nearby targets (one of which can be seen in the image above). However, the bump was postponed until Wednesday so that there would be enough time for the team to finish its assessment of the Aberlady workspace.

On the penultimate day of observations at Aberlady, we will focus on refining our understanding of the composition of local rocks and drilled material. ChemCam measurements of the drill hole and accompanying MAHLI images will be used to characterize a potential vein within the drilled rock. ChemCam will also target the edge of a large bedrock chunk, which appeared to get uplifted during drilling… [More at link]