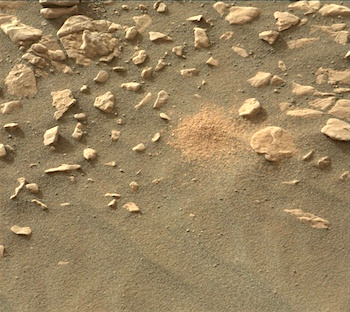 Sol 2380, April 16, 2019, update by MSL scientist Brittney Cooper: Yesterday’s discussions with the science team focused on determining which target in the vicinity of “Aberlady” will become the focus of the next drill campaign: target 2, or target 3 (pictured in the Sol 2379 Mission Update). In the end, target 3 was recommended by rover planners for its flatter texture, as an APXS raster of both targets showed there wasn’t a large difference in composition between the two. Once formally included in plan activities, target 3 will be given a proper name consistent with those being used in the “Glen Torridon” region.

Tosol begins with a MAHLI open cover image of the Aberlady sample dump pile (shown above) and then an arm retract to get it out of the way for a Mastcam multispectral observation of the dump pile that follows. Next, a Navcam dust devil survey and suprahorizon movie are included to monitor clouds and… [More at link]