Mars 2020: Things are stacking up for the spacecraft 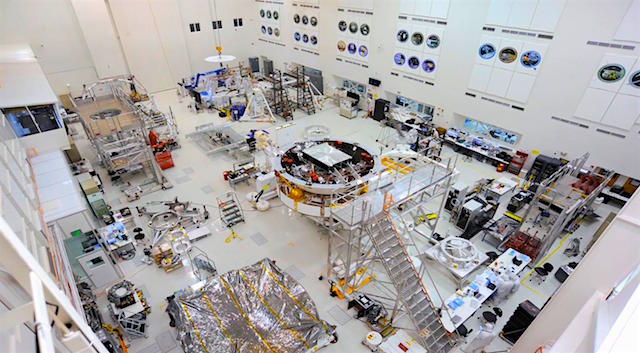 For the past few months, the clean room floor in High Bay 1 at NASA’s Jet Propulsion Laboratory in Pasadena, California, has been covered in parts, components and test equipment for the Mars 2020 spacecraft, scheduled for launch toward the Red Planet in July of 2020. But over the past few weeks, some of these components – the spacecraft-rocket-laden landing system and even the stand-in for the rover (christened “surrogate-rover”) – have seemingly disappeared.

In reality, they are still there, tucked neatly into the entry capsule, as they will be when it’s time for launch. The procedure is known as vehicle stacking and involves a hyper-detailed plan for what goes where and when.

“One of our main jobs is to make sure the rover and all the hardware that is required to get the rover from here on Earth to the surface of Mars fits inside the payload fairing of an Atlas V rocket, which gives us about 15 feet [5 meters] of width to work with,” said David Gruel, assembly, test and launch operations (ATLO) manager for Mars 2020 at JPL.

The first step is to place the rocket-powered descent stage on top of the surrogate rover (the real rover is being integrated and tested in tandem with the spacecraft stack). Then, when all the holes line up and everything is attached, checked and re-checked again, the back shell is lowered over them via gantry crane… [More at link]