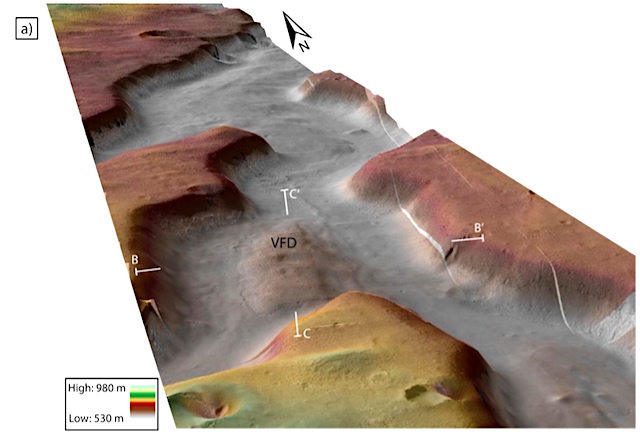 [Editor’s note: From a paper by Solmaz Adeli and five co-authors recently published in the Journal of Geophysical Research.]

In the last two decades with the increase of high resolution imagery data, more studies report the presence of ice deposits covered by dust and debris on the Martian surface, in both mid‐latitudes. These deposits must have been formed under different atmospheric conditions, since water ice is not stable in the current surface environment.

One of the generally accepted hypotheses for their formation is precipitation induced by variations of Mars’ axial tilt known as obliquity. During high obliquity phases, ice would have sublimated from the poles and re‐deposited in the mid‐latitudes.

Here, we report the presence of small‐scale ice deposits, located on the floor of a valley system in Terra Cimmeria. Although it is clear that these deposits were formed in different climatic conditions, their formation seems to be related to an impact into a shallow subsurface ice layer, redistributing a mixture of ejected material and ice across the region around the impact site.

This study shows the importance of local geological processes, e.g. impact cratering, in investigations of water ice distribution on Mars. Near‐surface ice reservoirs are of high importance in the search for life, and for future human exploration on Mars. [More at link]