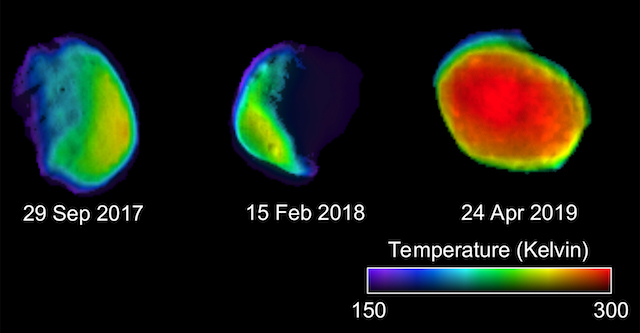 For the first time, NASA’s Mars Odyssey orbiter has caught the Martian moon Phobos during a full moon phase. Each color in this new image represents a temperature range detected by Odyssey’s infrared camera, which has been studying the Martian moon since September of 2017. Looking like a rainbow-colored jawbreaker, these latest observations could help scientists understand what materials make up Phobos, the larger of Mars’ two moons.

“This new image is a kind of temperature bullseye – warmest in the middle and gradually cooler moving out,” said Jeffrey Plaut, Odyssey project scientist at NASA’s Jet Propulsion Laboratory in Pasadena, California, which leads the mission. “Each Phobos observation is done from a slightly different angle or time of day, providing a new kind of data.” [More at link]