HRSC: From canals to craters 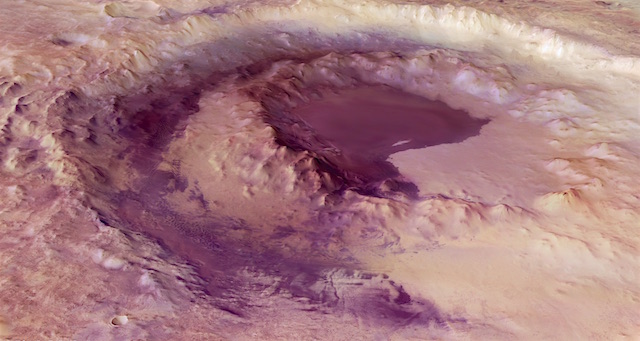 Mars was once believed to be criss-crossed by a system of irrigation canals – dark troughs that sliced across the planet’s surface, excavated by an intelligent society of thirsty martians. The astronomer who promoted this idea lends his name to the crater shown in this image from ESA’s Mars Express: Lowell crater.

American astronomer and author Percival Lowell is perhaps best known for popularising this canal theory in the late 1800s and early 1900s; the idea was initially proposed by Italian scientist Giovanni Schiaparelli, who noted the presence of dark lines on Mars in observations from the 1870s. Schiaparelli described these features as canali, later translated not as ‘channels’ or ‘gullies’, but as ‘canals’ – a phrase that hinted at a somewhat more artificial origin.

While these canali were later shown to be an optical illusion as astronomical observations improved immeasurably in quality and precision, the notion of a race of parched, canal-building martians persisted for some time and went on to have a huge influence on the science fiction of the time, perhaps spurred on by the rapid industrialisation – and canal-building – occurring on Earth throughout the 1900s… [More at link]