Detecting carbonates on the martian surface 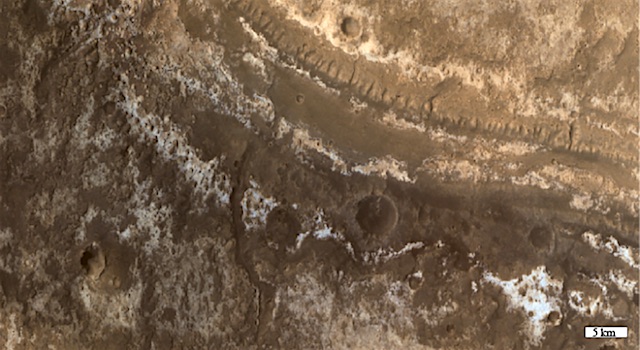 Scars of ancient lakes and rivers, as well as minerals that form only when water is present, have convinced many researchers that Mars was once conducive to life. But one type of alteration mineral, carbonate, has been conspicuously scarce in some studies, raising doubts about whether there was enough carbon dioxide vapor to warm Mars’s early atmosphere.

Carbonate minerals such as calcite—the key ingredient of marble, limestone, and seashells—are formed when water traps atmospheric carbon dioxide. The pale, translucent minerals have a distinct spectral signature, which remote sensing instruments located aboard the Mars Reconnaissance Orbiter can detect. The orbiter spotted carbonates before, but in 2017, the Curiosity rover found no evidence of carbonate minerals on Mars’s surface, confounding scientists.

Now a new study based on the orbiter’s remote sensing data presents fresh evidence of carbonates mixed among hydrated minerals across Mars’s surface. Bultel et al. searched for carbonates all over Mars in weathering profiles, vertical arrays of rock that span from a few centimeters to 100 meters thick. These profiles hold clues to what the climate was like on Mars in the past because they show how rocks have lost and gained soluble elements over time. On Mars, the profiles often resemble a layer cake, with clay minerals rich in aluminum on top, iron-rich clay in the middle, and magnesium-rich clay on the bottom… [More at links]