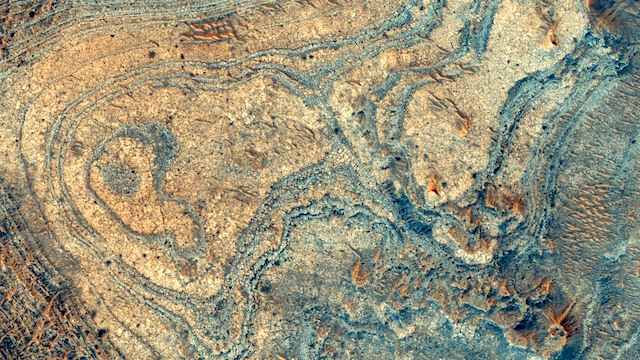 Ashfall from ancient volcanic explosions is the likely source of a strange mineral deposit near the landing site for NASA’s next Mars rover, a new study finds. The research, published in the journal Geology, could help scientists assemble a timeline of volcanic activity and environmental conditions on early Mars.

“This is one of the most tangible pieces of evidence yet for the idea that explosive volcanism was more common on early Mars,” said Christopher Kremer, a graduate student at Brown University who led the work. “Understanding how important explosive volcanism was on early Mars is ultimately important for understand the water budget in Martian magma, groundwater abundance and the thickness of the atmosphere.”

Volcanic explosions happen when gases like water vapor are dissolved in underground magma. When the pressure of that dissolved gas is more than the rock above can hold, it explodes, sending a fiery cloud of ash and lava into the air. Scientists think that these kinds of eruptions should have happened very early in Martian history, when there was more water available to get mixed with magma. As the planet dried out, the volcanic explosions would have died down and given way to more effusive volcanism — a gentler oozing of lava onto the surface. There’s plenty of evidence of an effusive phase to be found on the Martian surface, but evidence of the early explosive phase hasn’t been easy to spot with orbital instruments, Kremer says… [More at links]