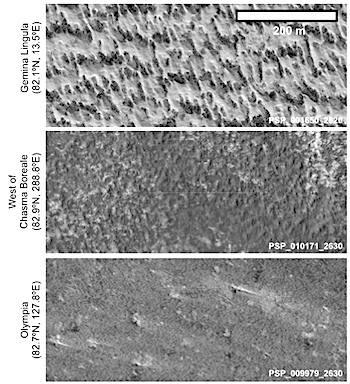 [Editor’s note: From a paper by Jonathan Bapst and three co-authors recently published in the Journal of Geophysical Research.]

• We identify residual water ice with elevated surface porosity (>40%) that is densified at depths <0.5 m, consistent with recent accumulation
• Denser, vertically homogeneous ice is detected at the residual cap edge, consistent with ablation and exhumation of older, densified ice

The polar regions of Mars host kilometer‐thick stacks of water ice that have been built up over millions of years. At the north pole today, the top of this ice deposit is interacting with the Martian atmosphere. Whether or not ice at the surface is fluffy (like snow) or dense (like an ice slab) can provide useful information about the polar ice cap and recent climate.

Multiple years of surface temperature measurements have been acquired by instruments aboard spacecraft in orbit around Mars. By comparing these values with temperature simulations, we can narrow down the type of ice near the surface.

Our results show that the type of ice varies across the polar cap. Some regions appear to be a snow‐like surface where the polar cap may be growing. Other regions, most notably along the edge of the polar cap, show denser ice that is likely older. The nature of the ice tells us about the current climate and how these kilometer‐thick ice deposits form. [More at link]