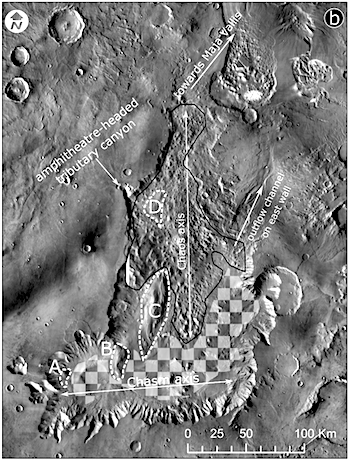 [Editor’s note: From a paper by Ranjan Sarkar and four co-authors recently published in Icarus.]

• Juventae Chasma is a merger of a chaos and a chasm
• The chaos component formed first in response to Early Hesperian compression
• The chasm-component formed next in response to Middle to Late Amazonian extension
• Features A–D are layered at <2 m scale
• An eolian origin fits best for Features A, C, and D; whereas a lacustrine or low-energy eolian origin is more fitting for Feature B
• Features A–D also record the Early Hesperian compressional event in the form of joints — indicating their existence prior to chasm formation

Juventae Chasma, a canyon peripheral to the Valles Marineris trough system, is the product of a unique merger of a Martian chaotic terrain depression and an extensional (tectonic) chasm. The chaotic terrain portion is set along a NNE-SSW axis, while a linear trough (the chasm component) is present along a WNW-ESE axis. Within the chasm are four discrete bodies of layered, light-toned rocks of sedimentary origin, Features A–D…  [More at link]

This entry was posted in Reports and tagged chaotic terrain, Juventae Chasma, tectonics. Bookmark the permalink.