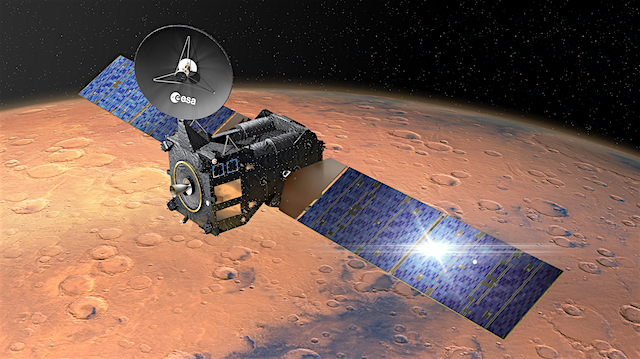 On 15 June, the ESA-Roscosmos ExoMars Trace Gas Orbiter (TGO) will follow a different path. An ‘Inclination Change Manoeuvre’ will put the spacecraft in an altered orbit, enabling it to pick up crucial status signals from the ExoMars rover, Rosalind Franklin, due to land on the Red Planet in 2021.

After completing a complex series of manoeuvres during 2017, ExoMars TGO is now orbiting the Red Planet every two hours, collecting scientific data from NASA’s surface-bound rover and lander, and relaying it back to Earth. At the same time, the orbiter is gathering its own data on the planet’s atmosphere, water abundance and alien surface.

More than a year before Rosalind even lifts off from Earth’s surface, flight dynamics experts at ESA’s ESOC mission control centre have formulated a long-term plan to ensure ExoMars TGO can communicate with the new ESA rover and surface platform, contained in the entry, descent and landing module.

Slight changes to a spacecraft’s orbit have a large effect over time, so while the upcoming manoeuvres will only slightly alter TGO’s speed, it will be in the right position to communicate with the then-incoming rover by 2021…. [More at link]