How the James Webb Space Telescope will study Mars 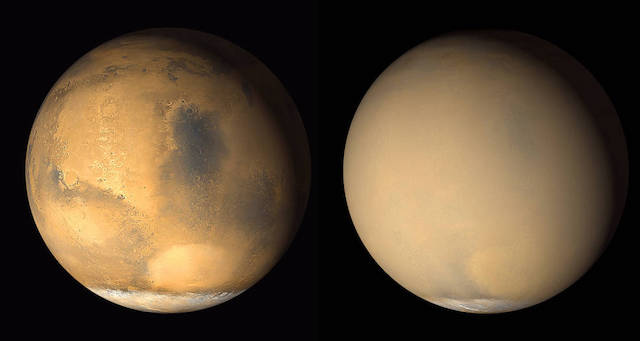 In the summer of 2018, a dust storm blanketed the entire planet Mars. From the surface, the Sun would have looked like tiny orb in a murky brown sky. Dust carpeted the solar panels of NASA’s intrepid Opportunity rover, which would not recover after it lost power. Orbiting spacecraft and the Curiosity rover monitored the storm from their respective vantage points, but none of these robotic explorers had a view wide enough to see the entire planet at once.

When NASA’s James Webb Space Telescope, launching in 2021, reaches its destination a million miles from Earth, it will be able to see the whole disk of Mars every two years. If a global dust storm envelops the Red Planet at a time when Webb could see it, the powerful space telescope could gather information about the storm, adding to data from spacecraft on or close to the planet’s surface.

Reporting Martian weather is just one way in which Webb, designed to gaze into deep space and unlock cosmic mysteries, can join forces with other NASA spacecraft to explore Mars. Webb can view Mars in the infrared, a kind of light invisible to human eyes that is especially useful for dissecting certain chemicals in planetary atmospheres. While Webb will primarily look for chemical fingerprints in distant worlds orbiting other stars, exoplanets, it can also use these skills for nearby Mars… [More at link]