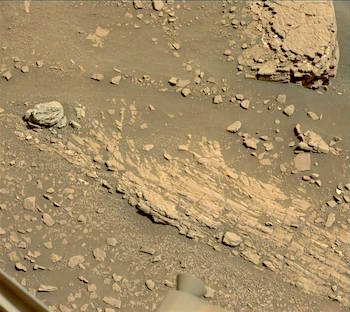 Sols 2427-28, June 5, 2019, update by MSL scientist Claire Newman: The main focus of today’s plan was observations of the interbedded thick and thin layers we found at Woodland Bay before we drive away again, perhaps as early as the next plan. Primarily, this involved completing our analysis of their composition (with ChemCam and APXS) and using MAHLI to distinguish grain sizes. The team found two targets – “Tobermory” on the more resistant layer and “Mons Graupius” on the more recessive and thinly laminated layer – that were both far enough away for ChemCam targeting and close enough for APXS and MAHLI. This co-targeting meant that ChemCam could ‘blow away’ dust to give MAHLI a nice clear view of the grains in the actual rock itself. Another ChemCam target, “Avon,” was added on what appeared to be a more resistant layer. In addition, MAHLI will be taking two mosaics: “Deeside” will provide an overview of the layers described above, while “Lochgilphead” will cover a section of the exposed outcrop that may have cross-bedding… [More at link]