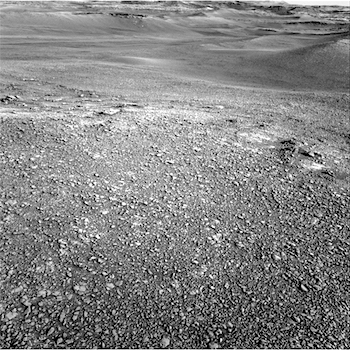 Sols 2431-33, June 8, 2019, update by MSL scientist Mark Salvatore: After yesterday’s 47 meter drive, Curiosity awoke to a much different landscape than she had been analyzing over the past week. Instead of the beautifully exposed sedimentary bedrock that had been extensively analyzed since late May, Curiosity now finds herself among a pile of small pebbles and cobbles intermixed with sand.

While this landscape doesn’t allow for brushing of any of these small rocks, Curiosity will still perform some high-resolution microscopic imaging and some bulk chemical analyses using both the ChemCam and APXS instruments on nearby targets to characterize the local cobbles and soils. The following morning, Curiosity will conduct a series of environmental observations using ChemCam and Mastcam before embarking on a ~40 meter drive. Once Curiosity arrives at this new location… [More at link]

This entry was posted in Reports. Bookmark the permalink.