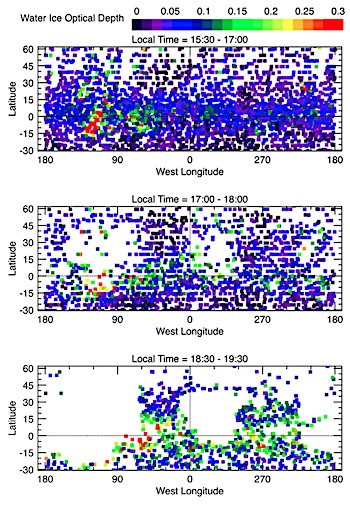 [Editor’s note: From a paper by Michael Smith recently published in Icarus.]

• The local time variation of cloud optical depth is examined from THEMIS observations.
• Clouds have higher optical depth during the evening than earlier in the afternoon.
• After sunset, clouds expand to locations where clouds were not present earlier.

The move of the Odyssey spacecraft during Mars Years 31 and 32 to an orbit with local time near 7:00 AM and PM has enabled the systematic retrieval of water ice cloud optical depth using THEMIS thermal infrared images at a time of day not accessible from Mars Global Surveyor, Mars Reconnaissance Orbiter, or previous Odyssey observations.

Because water ice clouds form by condensation, relatively small changes in atmospheric temperature can cause clouds to form or sublimate quickly, and there can be large changes in water ice cloud optical depth over the course of a day.