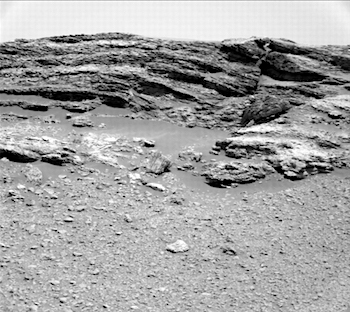 Sol 2440, June 17, 2019, update by MSL scientist Dawn Sumner: Curiosity’s most recent transmission didn’t come down as expected, so our plan today is to command the rover to retransmit its latest data. That includes where it ended up after its drive this weekend. We still spent the morning planning. Because we were missing key data about exactly where Curiosity is, we could not implement our planned MAHLI and APXS analyses. Rather, we focused on “untargeted” observations, which don’t require knowing Curiosity’s exact location. The team planned regular weather observations, a survey of the sky at twilight, a movie looking for dust devils and a second one looking up at the clouds. We also planned a 360° Mastcam image to capture the regional outcrops as well as three ChemCam AEGIS analyses, where the instrument automatically selects targets within a region defined by the team. We also asked Curiosity to retransmit detailed location and image data so that we can plan… [More at link]