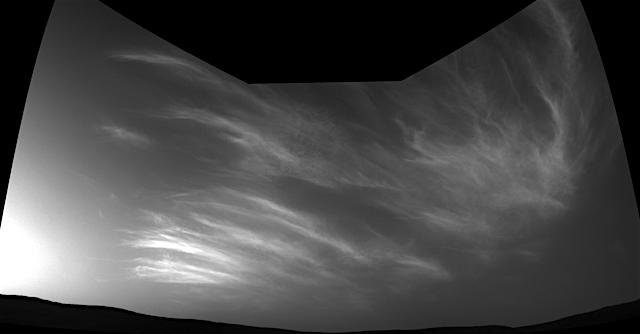 How did the Red Planet get all of its clouds? CU Boulder researchers may have discovered the secret: just add meteors.

Astronomers have long observed clouds in Mars’ middle atmosphere, which begins about 18 miles (30 kilometers) above the surface, but have struggled to explain how they formed.

Now, a new study, which [was] published on June 17 in the journal Nature Geoscience, examines those wispy accumulations and suggests that they owe their existence to a phenomenon called “meteoric smoke” — essentially, the icy dust created by space debris slamming into the planet’s atmosphere.

The findings are a good reminder that planets and their weather patterns aren’t isolated from the solar systems around them.

“We’re used to thinking of Earth, Mars and other bodies as these really self-contained planets that determine their own climates,” said Victoria Hartwick, a graduate student in the Department of Atmospheric and Ocean Sciences (ATOC) and lead author of the new study. “But climate isn’t independent of the surrounding solar system.”

The research, which included co-authors Brian Toon at CU Boulder and Nicholas Heavens at Hampton University in Virginia, hangs on a basic fact about clouds: They don’t come out of nowhere… [More at links]