Mars 2020 rover gets its wheels 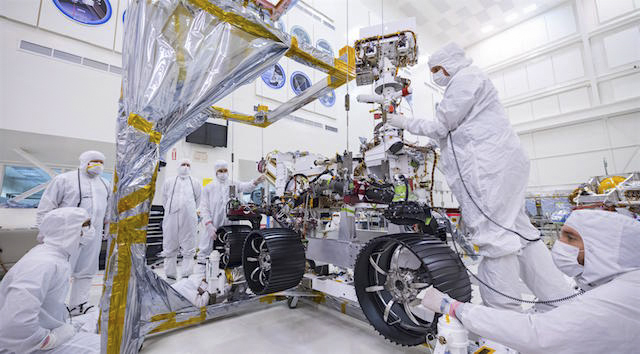 In this image, taken on June 13, 2019, engineers at NASA’s Jet Propulsion Laboratory in Pasadena, California, install the starboard legs and wheels – otherwise known as the mobility suspension – on the Mars 2020 rover. They installed the port suspension later that day.

“Now that’s a Mars rover,” said David Gruel, the Mars 2020 assembly, test, and launch operations manager at JPL. “With the suspension on, not only does it look like a rover, but we have almost all our big-ticket items for integration in our rearview mirror – if our rover had one.”

Within the next few weeks, the team expects to install the vehicle’s robotic arm, the mast-mounted SuperCam instrument and the Sample Caching System, which includes 17 separate motors and will collect samples of Martian rock and soil that will be returned to Earth by a future mission. [More at link]