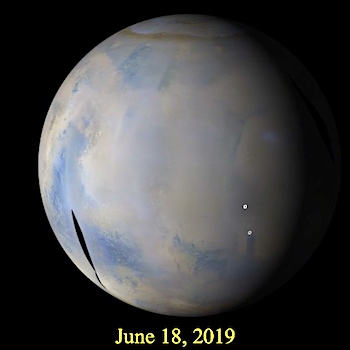 With the exception of a single arcuate-shaped dust storm, similar in morphology to a terrestrial low-pressure systems, which was dipping southward across Acidalia, the northern lowlands were relatively uneventful this past week. In the southern hemisphere, a dust storm north of Argyre was spotted lofting dust into the canyons of Valles Marineris near the beginning of the week. The storm quickly subsided, leaving a dust haze that partially obscured the canyon floors and other surrounding landforms. Tyrrhena, Sirenum, and Cimmeria also experienced some small fleeting dust-lifting events… [More at link, including video]