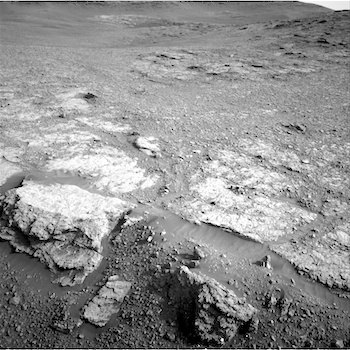 Sol 2450, June 28, 2019, update by MSL scientist Lauren Edgar: Curiosity is parked in front of a ridge-forming outcrop known as “Harlaw” in the Glen Torridon region, and the team had some fun with naming targets today. While planning contact science to investigate a rough, potentially nodular face of the outcrop, the Geology group decided to use the name “Badcall,” which definitely raised some eyebrows during the planning process. The target is actually named after Badcall Bay on Earth, which exposes some of the oldest rocks in Western Europe. So hopefully this observation turns out well! I was the SOWG Chair today, and it was a late slide sol… [More at link]