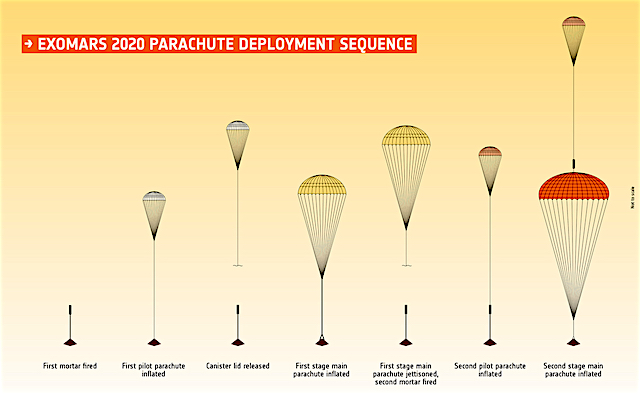 The full parachute system that will help deliver the ExoMars rover and a surface science platform to the martian surface has completed a full-scale high-altitude deployment sequence test, although unexpected damage to the main parachutes occurred.

Meanwhile, the main elements of the descent module hardware, including the heat shield that will protect the lander as it enters the atmosphere of Mars, have been delivered to Thales Alenia Space in Turin, Italy, this week. The European carrier spacecraft that will carry the mission from Earth to Mars, and the Russian landing platform named Kazachok already arrived in Italy earlier this year. The rover, named Rosalind Franklin, is currently being fitted with hardware and its scientific payload in Stevenage, UK. Once fully integrated, the hardware will be tested to ensure it is ready for the journey to space, and operations on Mars.

As part of the planned upcoming testing, the parachute system will be adjusted to address a problem observed in the most recent high-altitude drop test, conducted on 28 May at the Swedish Space Corporation Esrange facility in Kiruna.

The descent module needs two parachutes – each with its own pilot chute for extraction – to help slow the craft prior to landing. Following separation of the parachutes, the speed must be suitable for the braking engines to safely deliver the landing platform and the rover onto the surface of Mars. The entire sequence from atmospheric entry to landing takes just six minutes… [More at link]