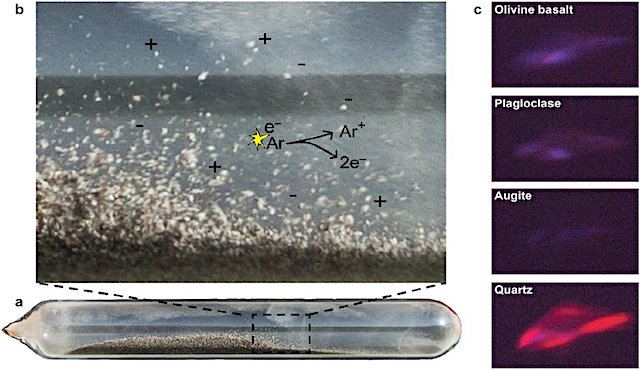 The processes behind the release and consumption of methane on Mars have been discussed since methane was measured for the first time for approximately 15 years ago. Now, an interdisciplinary research group from Aarhus University has proposed a previously overlooked physical-chemical process that can explain methane’s consumption.

About 15 years ago, one could for the first time read about methane in Mars’s atmosphere. This aroused great interest, also outside the scientific circles, since methane, based on our knowledge of methane on Earth, is considered a bio-signature, i.e. signs of biological activity and thus life.

In subsequent years, one could read articles that alternately reported on methane’s presence and absence. This variation led to doubts about the accuracy of the first methane measurements. Recent measurements of methane in Mars’ atmosphere have now shown that its dynamics is real enough and the fact that sometimes only very low concentrations can be measured is due to an unresolved mechanism that makes methane disappear from the atmosphere and not a mis-measurement..

The methane sources or the causes for its disappearance have not been identified at present. Especially the latter, the rapid disappearance of methane, lacks a plausible mechanistic explanation. The most obvious mechanism, namely the photochemical degradation of methane caused by UV radiation, cannot explain methane’s rapid disappearance, which is a prerequisite for explaining the dynamics.

An multidisciplinary group of researchers at Aarhus University have just published an article in Icarus, in which they propose a new mechanism that can explain the removal of methane on Mars. For years, the multidisciplinary Mars group (marslab.au.dk) has investigated the importance of wind-driven erosion of minerals for the formation of reactive surfaces under Mars-like conditions. For this purpose, the research group has developed equipment and methods for simulating erosion on Mars in their “earthly” laboratories….

Abstract from the Icarus paper: Laboratory experiments show that sand grain saltation in a Mars-like environment can result in the ionization of argon. This suggests that saltation can be a mechanism for the destruction of methane (CH4) on Mars given the ionization energy of argon is higher than the energy required to ionize methane to a reactive cation. The ionization energy is also higher than the energy to dissociate methane to highly reactive species like CH3, CH2, and CH. The feasibility of capturing the resulting emission glow on a windy Martian night is discussed. [More at links]