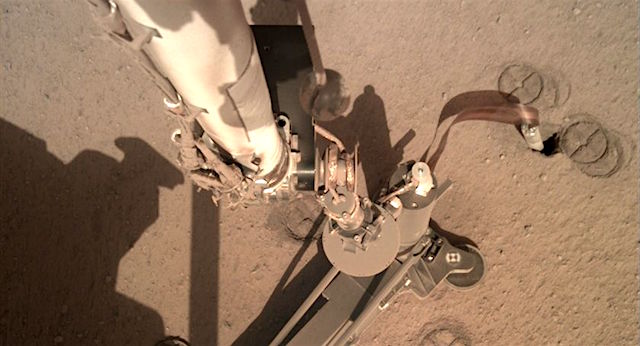 A couple more tiny quakes and heat probe progress: It’s been 3 months since my last check-in with the InSight mission. In that time, they’ve detected a few more very small Marsquakes, including the largest yet, coming in at a magnitude 3.0, reported via the SEIS instrument Twitter feed on June 5. I’m looking forward to the Ninth International Conference on Mars in about 3 weeks, when there will be several presentations on scientific results from team members representing the seismometer, magnetometer, weather, and heat probe instruments.

While we’re waiting for science results, the main item of interest on InSight has been the continuing work to solve the problem with the Heat Flow and Physical Properties Probe (HP3, pronounced “H-P-cubed”). Its main component is a self-hammering mole that’s supposed to jackhammer 5 meters down into the Martian soil, unreeling an instrumented tether that it’ll use to measure the rate of heat flow out of the Martian interior and also the way that the Martian surface responds to daily and seasonal temperature changes.

The issue is that the self-hammering mole hasn’t managed to penetrate the surface, stopping at roughly 20 centimeters depth despite very insistent hammering. As part of the anomaly recovery effort, last weekend mission engineers lifted the mole’s housing completely off the surface and set it down elsewhere, exposing the top of the mole sticking out a hole that is, very surprisingly, more than twice as wide as the mole…. [More at link]