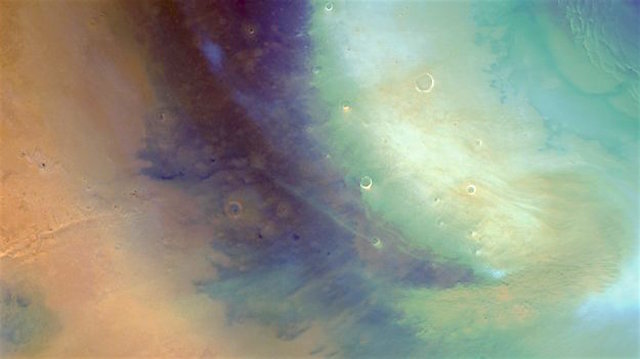 ESA’s Mars Express has been keeping an eye on local and regional dust storms brewing at the north pole of the Red Planet over the last month, watching as they disperse towards the equator.

Local and regional storms lasting for a few days or weeks and confined to a small area are common place on Mars, but at their most severe can engulf the entire planet, as experienced last year in a global storm that circled the planet for many months.

It is currently spring in the northern hemisphere of Mars, and water-ice clouds and small dust-lifting events are frequently observed along the edge of the seasonally retreating ice cap.

Many of the spacecraft at Mars return daily weather reports from orbit or from the surface, providing global and local impressions of the changing atmospheric conditions. ESA’s Mars Express observed at least eight different storms at the edge of the ice cap between 22 May and 10 June, which formed and dissipated very quickly, between one and three days… [More at link]