Curiosity update: What would we do without MAHLI? 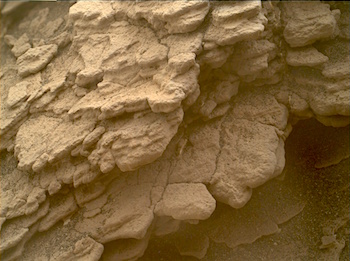 Sols 2461-62, July 8, 2019, update by MSL scientist Roger Wiens: MAHLI was busy over the weekend. The data from Mars returned a trove of close-up images from the outcrop near the top of “Harlaw Rise,” including the one shown here. Along with outcrop images, MAHLI took pictures of the rover wheels to check for wear and tear. Those images can be seen at this link. Although the wheels have developed some holes, the testing and modeling that have been done since early 2014 indicate that Curiosity can still travel a number of kilometers on these wheels.

Today the team was busy planning two sols of activity. The rover moved only three meters over the weekend, so it is not far from last week’s activity. MAHLI will be active again, getting a “dog’s eye view” of laminated target “Strathdon.” MAHLI, APXS, and ChemCam will all investigate the top of the same block, with the target name “Feshie” as well as a nearby block named “Sligachan.” ChemCam and Mastcam will… [More at link]