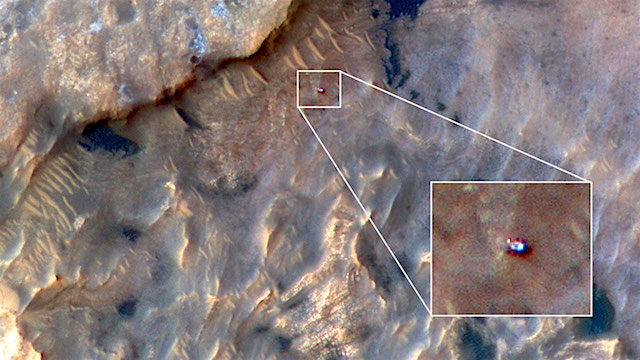 A dramatic Martian landscape can be seen in a new image taken from space, showing NASA’s Curiosity rover examining a location called “Woodland Bay.” It’s just one of many stops the rover has made in an area referred to as the “clay-bearing unit” on the side of Mount Sharp, a 3-mile-tall (5-kilometer-tall) mountain inside of Gale Crater.

The image was taken on May 31, 2019, by the High Resolution Imaging Science Experiment (HiRISE) camera aboard NASA’s Mars Reconnaissance Orbiter (MRO). In the image, Curiosity appears as a bluish speck. Vera Rubin Ridge cuts across the scene north of the rover, while a dark patch of sand lies to the northeast.

Look carefully at the inset image, and you can make out what it is likely Curiosity’s “head,” technically known as the remote sensing mast. A bright spot appears in the upper-left corner of the rover. At the time this image was acquired, the rover was facing 65 degrees counterclockwise from north, which would put the mast in about the right location to produce this bright spot… [More at link]