Did the Lomonosov Crater impact create a mega-tsunami? 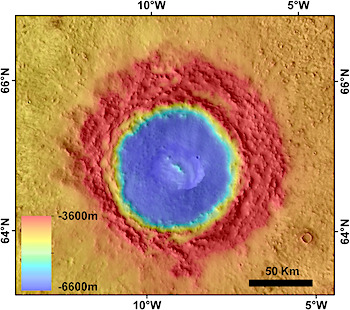 [Editor’s note: From a paper by François Costard and eight co-authors recently published in the Journal of Geophysical Research.]

The orientations of the associated lobate deposits, a conspicuous type of landforms called Thumbprint Terrain, suggests that if an impact event triggered the mega‐tsunami, the most likely location of the source crater is within the northern plains regions situated north of Arabia Terra. This study focuses on the identification of impact craters that impacted into the ocean and are likely to have produced the tsunami.

We selected 10 complex impact craters, based on their diameters, location, and geomorphic characteristics. Of those, the Late Hesperian ~120‐km‐diameter Lomonosov crater exhibits a unique topographic plan view asymmetry (compared to other similar‐sized and similar‐aged craters in the northern plains such as Micoud, Korolev, and Milankovic). We attribute its broad and shallow rim, in part, to an impact into a shallow ocean as well as its subsequent erosion from the collapsing transient water cavity.

The likely marine formation of the Lomonosov crater, and the apparent agreement in its age with that of the Thumbprint Terrain unit (~3 Ga), strongly suggests that it was the source crater of the tsunami. These results have implications for the stability of a late northern ocean on Mars. [More at link]