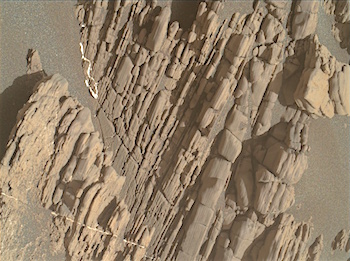 Sols 2478-80, July 27, 2019, update by MSL scientist Abigail Fraeman: Over the last few weeks Curiosity has collected hundreds of spectacular images, like the one above, that document the layers and textures of rocks exposed in the “Visionarium.” (And as we heard in the last blog, we also set a mission record yesterday for having the highest tilt we’ve ever had while conducting contact science — over 25 degrees!) With all of this imaging under our belt, we’re now hoping to delve deeper into studying the composition of the rocks in the Visionarium, so we are beginning to look for our next potential drill target.

In the plan for the weekend, Curiosity will drive ~10 m to the top of the southern escarpment in the Visionarium. The drive will place us in an ideal location to image potential future drill targets. Before the drive, we’ll spend a sol collecting MAHLI and APXS data from targets named “Naver” and “Fetterangus,” along with ChemCam and Mastcam observations of “Malin Sea,” “Loch Katrine,” and “Loch Broom.” We’ll also take several environmental science monitoring observations, and an 80 frame stereo Mastcam mosaic of “Hebrides,” which is the area where we hope to find our next drill target… [More at link]