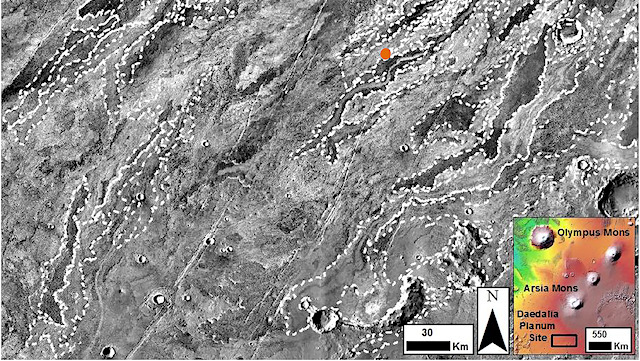 [Editor’s note: From a paper by Christine Simurda and two co-authors recently published in the Journal of Geophysical Research.]

• Unusual thermophysical variations are present on lava flows in Daedalia Planum that are not easily explained by observed thermal inertia
• A multi‐instrument, multispectral approach is used to identify the potential subpixel distribution of lava outcrops, sand, and dust
• Rough surfaces with a low day and high night temperature response contain the greatest percentage of exposed lava outcrops in the flow field

Daedalia Planum contains some of the youngest and most abundant volcanic activity on Mars. The lava flows exposed here were considered too dusty for previous thermal infrared studies, but our analysis suggests that the dust is not uniform and these surfaces contain significant proportions of lava outcrops rising above low‐lying regions of sand with a discontinuous dust cover.

The presence of different areal distributions of dust, sand, and lava outcrops on these flows is further supported by the unusual temperature behavior between flows as well as other studies showing that these flows have the roughest surfaces on Mars. Visible data are used to investigate the flow surface morphology and potential degree of dust cover. Thermal data combined with a thermophysical classification are used to evaluate the temperature response between.

These temperature variations are due to different distributions of lava outcrops, sand infill, and dust mantling. Most lava flows with a rough surface display a temperature response suggesting the presence of a larger percentage of lava outcrops versus sand and dust. These surfaces, identified as having minimal dust or more exposed outcrop, represent promising new targets for future compositional analysis. [More at link]