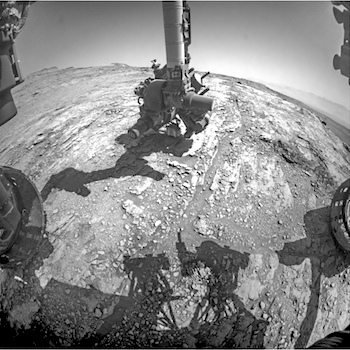 Sol 2484, August 1, 2019, update by MSL scientist Mark Salvatore: Today’s science activities were planned with the hopes of drilling our next target this weekend. The scientists on today’s shift were largely interested in characterizing the large block of exposed bedrock in front of the rover to derive as much information as possible before we punch through the surface and expose the rock’s interior. Last evening, Curiosity brushed the dust off of the rock and made some geochemical measurements using the APXS instrument (see image). For today, we planned to acquire a multispectral image of this brushed surface in addition to two remote laser induced breakdown spectroscopy (LIBS) measurements of the bedrock’s chemistry to determine whether there is spatial variability in the chemistry of this geologic unit.

We also have an opportunity to acquire a large Mastcam mosaic of the large and flat geologic feature to the south of Curiosity known as the Greenheugh pediment. This enigmatic feature has been a target of interest ever since Gale crater was first being considered as a potential landing site for the Curiosity rover, and so documenting it from this new vantage point has been a high priority for the geologists on the team… [More at link]