Are scarps on Mars oriented by wind erosion? 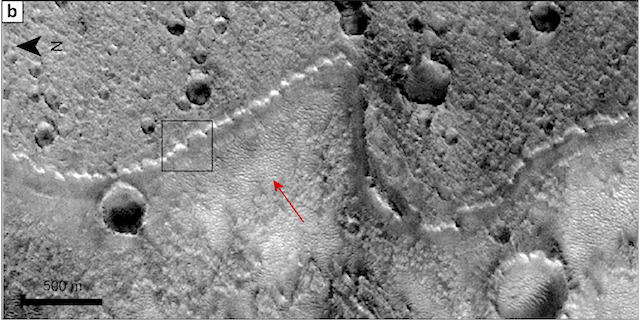 [Editor’s note: From a paper by Joshua Williams and three co-authors recently published in Icarus.]

Scarp orientation in regions of active aeolian erosion on Mars

• Scarps were analyzed in two regions of active aeolian erosion on Mars.
• No robust correlation between wind direction and scarp orientation was identified.
• Competing controls on scarp orientation likely include wind, impacts, and thermal stress.

Understanding aeolian erosion may be critical to identifying ancient martian biosignatures. Cosmogenic radiation destroys complex organic molecules during prolonged exposure at the martian surface, but outcrops freshly re-exposed by aeolian erosion provide potential sites where biosignatures could have been protected and made recently available for sampling. Wind-driven scarp retreat has been cited as the cause for young exposure ages measured in Gale crater.

Upcoming exploration by the Mars 2020 rover will focus on Jezero crater, another location of extensive aeolian erosion and meter-scale scarps. This work is motivated by the hypothesis that retreating scarps on Mars may prefer orientations that reflect the direction of erosive winds.

We mapped scarps in Jezero and Gale craters and compared their orientation distributions with local wind regimes interpreted from other aeolian indicators.No strong correlation between wind direction and scarp orientation was identified. The near-random distribution of scarp orientations suggests that in the locations studied the dominant processes controlling scarp orientation are either processes that do not prefer an orientation (e.g., impact or thermal fracturing processes), or that turbulent flow structures form at the scale of scarp topography and obscure the regional-scale signals of erosion with scarp-scale eddies and flow deflection. [More at link]