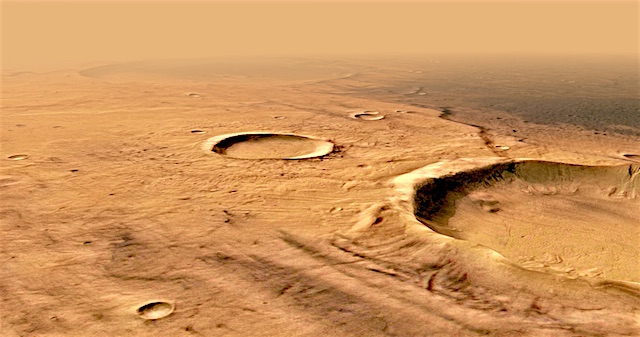 ESA’s Mars Express has captured the cosmic contrast of Terra Cimmeria, a region in the southern highlands of Mars marked by impact craters, water-carved valleys, and sand and dust in numerous chocolate and caramel hues.

Mars is often referred to as the Red Planet, due to the characteristic hue of its orb in the sky. Up close, however, the planet is actually covered in all manner of colours – from bright whites and dark blacks to yellows, reds, greens, and the cappuccino tones seen here.

These differences in colour are visible from telescopes on Earth. They are undeniably visually striking, but also reveal a significant amount about the composition and properties of the surface material itself.

These views based on Mars Express data are a great example of the diversity found on the martian surface: the darker regions towards the right (north) in the image at the top of this page are rich in minerals of volcanic origin, the most common of which found on Mars is basalt. The lighter patches to the left (south) are instead largely covered in fine silicate dust… [More at link]