Curiosity update: A change in the weather (observations) 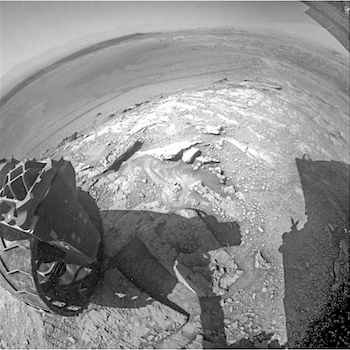 Sols 2489-91, August 8, 2019, update by MSL scientist Claire Newman: Over the weekend, Curiosity successfully dropped off a portion of the Glen Etive drill sample. But for some reason, the sequence was interrupted, so no images of the portion were acquired. Curiosity’s Remote Sensing Mast (RSM), on which ChemCam, both Mastcams, and all four Navcams are mounted, briefly stopped pointing as commanded on sol 2488. The RSM worked well in the tests planned on sol 2489 and downlinked ahead of today’s planning, however. So while the engineers continue to diagnose the issue, such as whether it involves recent changes to the way we heat motors connected to the RSM, we used it again cautiously in the sol 2490 plan. This meant avoiding observations that require us to look up from the surface or deck, to avoid any risk of dust piling up on lenses if the RSM became stuck there.

The net result was that most of the ENV Science Theme Group’s cloud and dust monitoring activities could not be included, as all of them involve using Mastcam or Navcam to look near the horizon or higher up. In the sol 2489 plan, we included some attempted dust devil imaging using the Rear Hazcams, but in today’s plan we focused on adding extra REMS one-hour extended blocks to measure air and ground temperature, pressure, humidity, and UV radiation. This should result in us measuring over 37 of the 48 Mars hours contained in this two-sol plan, compared to the 13 hours we’d have measured usually, including seven periods with 5 hours of continuous REMS. Long periods of continuous atmospheric data are useful for tracking weather patterns, atmospheric wave activity, and even clouds that we can detect in the REMS UV and ground temperature data after sunset. The ENV group also planned DAN active and RAD observations… [More at link]