Ground ice in fresh craters down to 39° north

Since 2008, the HiRISE camera on the Mars Reconnaissance Orbiter has imaged 20 small impact craters and crater clusters that expose fresh ground ice. A paper in the Journal of Geophysical Research from a team led by Colin Dundas (USGS Flagstaff) reviews the 20 known sites. 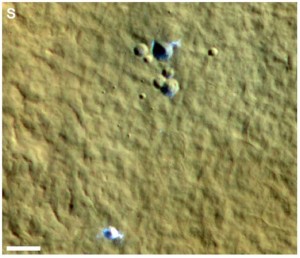 RECORD-SETTER — FOR NOW. This cluster of small craters lies at latitude 39° north, and exposes bright material — ice, most likely. The scale bar is 20 meters (66 feet) long. The impacts occurred between July and October 2012, and the cluster is the lowest latitude exposure of ground ice known so far. (Image taken from Figure 1 in the paper.)

The prize for the most equatorial ice-revealing crater (so far) goes to a crater cluster at 39.1° N, 190.3° E. The biggest ice-bottomed crater in the group is 12 meters (40 feet) wide. The impacts came sometime between July and October, 2012. Two other sites record the first southern hemisphere exposures of ice.

The team notes that the apparent distribution of ice-exposing craters in longitude around the northern hemisphere strongly reflects selection effects, as it closely follows the distibution of dust. Fresh craters of all kinds (ice-bearing or not) show up better on a dusty surface, thanks to the impact blast clearing away light-=tone dust to leave a highly visible dark splat mark.

Exposed ice appears bright, and the team suggests it represents “excess ice.” This is ice that forms in addition to that within the pore spaces of soil. As such, it may be leftover ice from a previous ice age, or an unusually humid near-surface atmosphere, or perhaps salts in the soil lower the vapor pressure at the ice table’s depth.

Ice in and around the craters remains visibly bright for months to years, indicating that it is clean ice rather than ice-cemented regolith. Observations of the craters suggest small-scale heterogeneities in this excess ice.

“The origin of such ice is uncertain,” the scientists write. “Ice lens formation by migration of thin films of liquid is most consistent with local heterogeneity in ice content and common surface boulders, but in some cases, nearby thermokarst landforms suggest large amounts of excess ice that may be best explained by a degraded ice sheet.”